Thunderbolt was conceived by engineers and operators.  Our philosophy is embodied in our motto ‘find a way or make one’ and it permeates every facet of our business.   Whether faced with technical, programmatic or resource-challenges, Thunderbolt’s passion is to exceed expectations by developing and fielding innovative solutions for defense and commercial markets in a manner unencumbered by bureaucracy.

Thunderbolt leads innovation with two primary lines of business – commercial logistics with Amazon as a primary customer, and defense and mission-systems serving defense and security missions. Thunderbolt represents hundreds of years of operational and engineering mission-system expertise. Applying commercial best-practices in pacing change through our strategic relationship with Amazon, Thunderbolt is emerging as a leader in a Global-Security market plagued with a fast-changing threats and increasingly compressed-resources. 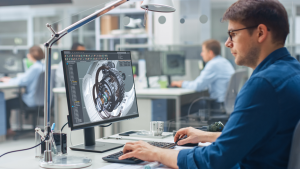 Thunderbolt’s team is comprised of technical and business management professionals with deep insight into operations, Department of Defense priorities and unparalleled engineering expertise across numerous franchise-programs.

Joseph Buss (Joe) attended the United States Naval Academy and upon graduation with a Mechanical Engineering, B.S., in 1994 Joe entered the United States Marine Corps. The leadership experience Joe gained during his active duty with the Marines provided him the platform upon which he began his career at Lockheed Martin. While continuing his service in the Marine Corps Reserves, Joe worked for Lockheed Martin in various engineering leadership positions & business-leadership capacities within Mission-System development programs. His role at Lockheed Martin as Business-Area leader for increasing complex and diverse, mission-critical programs greatly catalyzed his career. Joe’s achieved a reputation for reconstructing large programs that were on the verge of failure and leading associated customer-relationship remediation efforts. While at Lockheed Martin, Joe earned a Master of Science in Engineering Management. He has continued his executive-education at the Wharton School of the University of Pennsylvania and the Massachusetts Institute of Technology, Sloan School of Business. Following his time at Lockheed Martin, Joe assumed the role of Senior Vice President, Mission Solutions & Agile Decision Sciences, LLC supporting development of mission-management & integrated decision-support systems. During his time here, he was directly responsible for top-line growth of 70% and creating a corporate-wide Software Engineering Center of Excellence with a pipeline of new business estimated at $2B. He currently serves as Chief Executive Officer, Thunderbolt Solutions supporting development of mission-management & unmanned systems.

Andrew Winkler has over 20 years of systems and software engineering experience working in the management, design, development, and fielding of large-scale real time combat systems. He held positions of increasing responsibility from systems engineer to lead system architect for the US Navy’s $260M Aegis Open Architecture program to technical director for F-35’s $925M Open System Computing Architecture Refresh effort. Over the course of his career, he has developed extensive multi-discipline experience across software, hardware, program management and planning, sensors, command and control systems, weapon systems and communication systems across both surface and airborne platforms. Andrew founded Thunderbolt Software in 2016 and has led it through an incredible period of growth culminating in ranking 94th on Inc. 5000’s 2020 fastest growing private companies.

Prior to joining Thunderbolt Software, LLC, Mr. Malnak was the Chief Technology Officer for the Lockheed Martin Aeronautics Company. In this position, he was responsible for the identification, strategic roadmaps, portfolio commonality and technology adoption to drive technology and product commonality across the Aeronautics portfolio. This included responsibility and oversight of the recovery of troubled programs. He held this position from March 2019 through December 2020.

Mr. Malnak previously served as Vice President Aeronautics Chief Architect from November 2017 until March 2019. Prior to that he served as Vice President F-35 Mission Systems and Software for the Lockheed Martin Aeronautics business unit from September 2012 to December 2017. He was responsible for mission systems design requirements, avionics software, and mission systems hardware development and delivery. Overall responsibilities included design, development, system and flight test, verification, qualification and production of the F-35 avionics hardware, subsystems, software and build and integration of the product.

Prior to joining the Lockheed Martin Aeronautics team, Mr. Malnak was Vice President of Technical Operations for the Lockheed Martin MS2 business unit from November 2010 to September 2012. He was responsible for a multi-discipline engineering organization of more than 5,800 people spanning multiple locations, and had direct responsibility for providing people, process, and technology leadership in radar, command and control, weapons systems engineering, software, and hardware design and development. Through this time, he held numerous senior-leadership positions in the systems, computer systems and software engineering disciplines, where he has managed the design, development, integration and fielding of complex, large-scale military systems.

Mr. Malnak received his bachelor’s degree in computer science from Rutgers University in 1984. He is a member of the Institute of Electrical and Electronics Engineers (IEEE) and has received the Lockheed Martin NOVA leadership award in 2001, the Lockheed Martin Leadership Association Silver Knight Award in 2007 and the IEEE 2009 Engineer of the Year (Philadelphia Chapter).

José was formerly employed at ASRC Federal Mission Solutions (AFMS) since February 2009, ultimately holding the title of Director of Operations & Infrastructure. In this capacity, José lead a workforce of roughly 500 software developers in support of Department of Defense contracts valued at roughly $40M. Previously, José held the position of International Project Manager, while working at Private Management Company, conducting mining operations in Colombia, South America. José held this role for 2 years (August 2007 – November 2009). Here, he established and managed multiple mining operations with a focus on alluvial and dredging operations. Before this, José held the position of Program & Logistics Management Manager, while working for the Lockheed Martin Corporation. José occupied this position for 3 years (December 2004 – August 2007). Previously, José held the position of National Service Delivery Manager, while working at Schenker AG. While at Schenker, José established a national air freight team in support of a Fortune 100 company. Before this, José served in the United States Marine Corps as a Logistics Officer. While a Marine, José held various roles leading Marines. Particularly, he served as the Logistics Officer of a Marine Service Support Group of 400 Marines in support of a Marine Expeditionary Unit of 1,500 Marines and Sailors. He also served as an Officer Selection Officer, in an award-winning station, recruiting Marine Corps Officers.

José earned an MS in Organizational Dynamics from the University of Pennsylvania in 2007. Additionally, José graduated with a BS in English, with a minor in Spanish Cultural Studies in 1994 from the United States Naval Academy. José also earned an AS in General Studies from Ocean County College in 1991. José is married to Michele Mercado and they have 4 children, José, Elizabeth, William, and Cassandra.

Send us a message using the form below! We look forward to hearing from you!

We use cookies on our website to give you the most relevant experience by remembering your preferences and repeat visits. By clicking “Accept”, you consent to the use of ALL the cookies.
Do not sell my personal information.
Cookie settingsACCEPT
Manage consent

This website uses cookies to improve your experience while you navigate through the website. Out of these, the cookies that are categorized as necessary are stored on your browser as they are essential for the working of basic functionalities of the website. We also use third-party cookies that help us analyze and understand how you use this website. These cookies will be stored in your browser only with your consent. You also have the option to opt-out of these cookies. But opting out of some of these cookies may affect your browsing experience.
Necessary Always Enabled
Necessary cookies are absolutely essential for the website to function properly. This category only includes cookies that ensures basic functionalities and security features of the website. These cookies do not store any personal information.
Non-necessary
Any cookies that may not be particularly necessary for the website to function and is used specifically to collect user personal data via analytics, ads, other embedded contents are termed as non-necessary cookies. It is mandatory to procure user consent prior to running these cookies on your website.
SAVE & ACCEPT